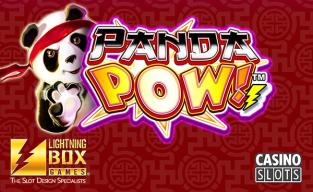 Lightning Box Games has added a new game to their portfolio, and it features a big, fighting panda bear. Panda Pow uses five reels and three rows, and there are 25 paylines on the reels that give you 25 ways to win on each spin. The wild panda symbol shows up on each reel, and it's always stacked. This symbol also acts as a bonus symbol, so if you get five anywhere on the reels, you'll get between five and 20 free spins.

In an interesting move, Lightning Box Games will also be providing a special version of this game for William Hill that uses just 10 paylines. This is especially for their land-based terminals, and it has been adjusted to meet the regulatory guidelines for such titles. The structure of the slot and some of the odds on features have been adjusted up and down, and this will allow it to be available in William Hill's network of over 2,300 land-based locations with video terminals.

This isn't the first deal like this that they have had. Their previous title Silver Lion was distributed through WillHill along the same lines, which was their debut in retail shops in the United Kingdom. This shows that their games are of a particularly solid quality, which allows them to see distribution along lines that other software companies don't necessarily get. This type of distribution is getting more popular with certain developers, and it shows the value of crossover titles between the land-based arena and the online industry.

Lightning Box Games produces high-quality online slots. Their titles are available at a variety of different operators, but they probably see the most players online through their inclusion in the Microgaming Quickfire platform. Their slots cover a lot of different themes and play styles, and you can find a variety of different features in them as well. They're a good example of a company that produces content that is high in quality without worrying so much about their quantity of titles, which is common in today's industry.