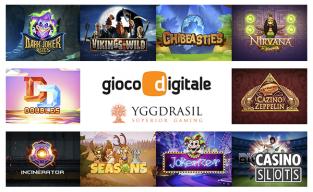 Yggdrasil Gaming has seen their titles released in Italy for the first time. A total of 11 titles have been cleared for this venture, which has went live through Gioco Digitale, a brand in Italy owned by GVC Holdings. This is a big deal for the software developer because they have been working quite a bit on strategic expansions in Europe for a while now, and this is their first entry into a major market.

In addition to almost a dozen titles, the Italian operators under GVC's umbrella are also getting access to Yggdrasil's BOOST product. This is all about in-game tools that can be used for promotions and other aspects of "gamification" in terms of setting up tournaments, social sharing (as a part of the related BRAG tool) and other items. The point is that this is giving them much more control over how they handle these games and how players are able to interact with them, which is huge.

A really important part of all of this is that Yggdrasil's titles are produced in HTML5. This makes them work with just about any platform out there today, including the platform used at GVC's casinos. They're looking at adding these select games to bwin.it next, which is another online property owned by GVC Holdings. There may be future expansion on top of that in the Italian market, but for now, these are some popular games like Vikings Go Wild and Nirvana that will be added to some of the top brands in the country, and that's huge for all of the parties involved.

Another critical aspect of this is that mobile gaming has been on the rise in a major way in Italy in the past 24 months, even moreso than the growth it saw before, and all of Yggdrasil's titles are mobile-friendly. In fact, they can all be used on a variety of smartphones and tablets because they are built on HTML5, so all you need to play is a connection and an updated Internet browser. This makes it easy for tons of players to get in on the action while on the go, which will only boost their popularity even further.