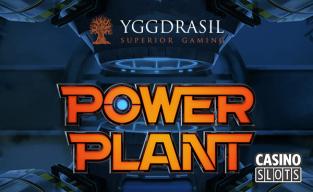 Yggdrasil Gaming has released a new game called Power Plant. When you first look at this slot, you'll immediately notice that the layout is very different than what you normally see from games in the video slot genre. There are five reels, but there are also eight different rows of symbols, and this lends itself to several dozen ways to win. You'll only need to pay for 50 paylines worth, however, and that keeps the bet sizes pretty even.

It's important to point out that Yggdrasil has been working on their backend as much as they have their new releases, and you can really see that work paying off with this new slot. Based on HTML5, this game uses the iSENSE 2.0+ framework, and it's the first of their games to do so. This helps players to get a particularly strong experience on mobile as well as desktop, and this is important because of how many more people are getting in on the action from their smartphones and tablets each year.

Since there are 40 different symbols that show up on the reels at a time, the fact that this game uses 82 paylines doesn't really seem that excessive. That could lead to some atypical bet sizes, but Yggdrasil has headed that off by only having you play with 50 coins per spin. What's more is that you can use coin sizes that go down to the $0.005 level, which means that the bet sizes start at $0.25.

Stacked wilds drive the majority of the gameplay. If you get at least one full reel of stacked wilds on a given spin, then you'll be given a free re-spin with those wilds held in place. Extra features like multipliers and better payouts will be given on the re-spin, and the more wild reels you get at once, the more extra features from the randomized pool of options you'll get. The gameplay has a high hit-rate and a low volatility, and while there aren't any over-the-top jackpots, you'll be able to hit some serious winning streaks in this game, particularly with the stacked wilds showing up on every reel.