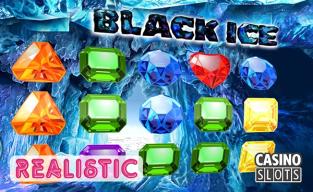 Set in a cold cave, Black Ice is a slot from Realistic Games that's designed to warm the hearts of anyone who plays it, with special rewards such as free respins that can carry on and on as extra wild symbols are added to the reels.

Punters shouldn't worry about slipping up when they play the Black Ice slot, as it comes with a great return to player percentage of over 95% and exciting in-game features. The 5 reels of colourful jewel symbols stand out against the cold background image and the 3D effect sees them moving against it when players tilt their devices. Alongside these red, blue, purple, green, orange and yellow precious stones is a wild symbol that helps to complete combinations by acting as any other, but things really start to heat up each time a winning line appears.

All non-wild symbols that created the win will transform into extra wilds that are added to the 40 already on the reels. A free respin with the enhanced symbol mix then plays out and if that results in another win-line being created, those symbols will turn into even more wilds. This carries on, with more and more wilds added to the reels until no more wins are seen.

Chill Out With Black Ice

This is the first 3D slot from Realistic Games and the company is looking forward to seeing how players react to this exciting new feature. It's available now at online and mobile casinos that feature software from this UK-based developer.

This is another exciting and positive step for us as we continue to grow, and we are confident that Black Ice will add another dimension to our expanding portfolio