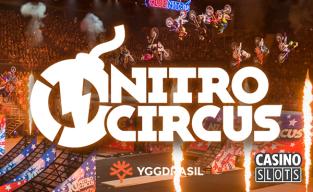 It may still be a few months from release, but Yggdrasil Gaming has announced their first ever branded slot game which will be themed around the Nitro Circus action sports brand. Scheduled for release in November, it will be launched to coincide with the major Nitro Circus 'You Got This' tour that visits six countries around Europe.

Few details have been released but it's been designed to bring the thrills of online casino gaming to Nitro Circus fans while also introducing the high octane excitement of the circus to casino players.

By working together, Yggdrasil and Nitro Circus will ensure that the slot features action packed images of the top athletes who perform the stunts, including Travis Pastrana, the Nitro Circus co-founder and star of the show.

It's the biggest action sports entertainment brand and both companies are young, innovative operations that are known for pushing the boundaries of their respective areas of operation.

Yggdrasil would not take the leap into the branded games space without the perfect partner, and we’ve found just that with Nitro Circus. Travis and Nitro Circus have a reputation for revolutionising their field.

Keep looking out for further details of what promises to be one of the most exciting slots of the year.