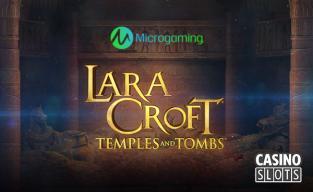 The Tomb Raider slot games have been hugely successful and Microgaming has just revealed the latest in the series. Lara Croft: Temples and Tombs is a 5-reel game, with 243 ways to win and an exciting Rolling Reels format.

The action takes place deep within the ruins of an ancient Egyptian temple. The excellent graphics add drama to the game, and the striking images include flaming torches, grappling hooks, ancient statues and several symbols of Lara Croft herself.

Anytime a winning combination is landed, the symbols that made the win will explode, leaving spaces for new ones to drop in to and potentially leading to new wins appearing. This Rolling Reels feature is made even more exciting by a rising multiplier that gets added to each win in a sequence. It can go up to 5x, or even higher in the free spins bonus round.

Those free games are awarded whenever a Lara Croft book symbol lands in 3 or more places at once. Instead of Rolling Reels increasing multipliers by 1x with consecutive wins, a 3x. 6x, 9x, 15x sequence is found during the bonus games.

Wild symbols help to complete lines during the base games and free spins. Players collect wilds to increase their chances of claiming the Minor, Major, or Grand progressive jackpots.

Lara Croft: Temples and Tombs works across desktop and mobile platforms. It's been developed for Microgaming by Triple Edge Studios and is part of a programme which gives smaller games developers access to the huge Microgaming network.

“The release of Lara Croft® Temples and Tombs™ is a tremendously exciting moment for Microgaming, building on our longstanding branded relationship with Square Enix. The game reflects Triple Edge Studios’ passion and enthusiasm.''