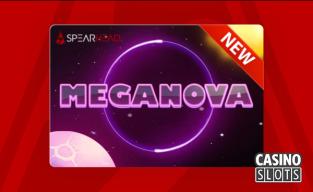 Players can embark on a trip around the solar system with the MegaNova online slot. It's new from Spearhead Studios and plays out on a 6x6 grid of meteors, planets, and the sun.

The tranquility of outer space fills the backdrop of this game, matching the chilled-out soundtrack. Players land a prize when clusters of matching symbols land together, with meteors paying smaller amounts and planets worth more.

The Sun is a wild symbol, and it can expand to cover a 4x4 block of others. This triggers a respin of the reels, which continue as long as more wilds appear. Overlapping wild symbols create a win multiplier that's paid out on any clusters that contain the Sun. Up to 3 Sun symbols can overlap, leading to bigger wins with a 3x multiplier.

It's possible for players to scoop a huge prize equal to 1,670x their triggering stake from this feature.

MegaNova is a mobile-optimised game that has been created using Spearhead Studios' own game development technology. It has a responsive UI across all platforms. Like all Spearhead Studios games, MegaNova is fully licensed in multiple gambling jurisdictions, and comes with high returns.

“MegaNova offers players something different than what they are expecting. We are inviting them to join a tranquil, soothing game that bursts into life whenever one or more of the wilds land. The work we’ve put into this title paid off.''