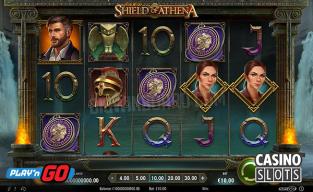 Rich Wilde and the Shield of Athena is the fifth slot from Play'N Go to star this rugged explorer. This time around, he's joined by his daughter, Cat, as they head underwater in search of a new treasure.

Players can scoop some treasures of their own when they join the adventure on PCs or mobiles. Reel re-spins with extra wild symbols locked in place, and the Medusas' Gaze free spins round are among the bonuses.

This is a 5-reel, 10-line game that uses high-quality graphics. The game sits against a backdrop of stone columns and waterfalls within a cave. Alongside the lower value card symbols, it features images inspired by ancient Greek mythology, such as rings, coins, and the fearsome animated Medusa herself. Rich Wilde is a wild symbol and Cat is the scatter.

Wilde Re-spins can trigger at any time. If the Shield of Athena symbol appears, it locks in place and turns into an extra wild. Other reels re-spin, with any more shields also fixing to the reels. This carries on until no shield symbols appear, and then all wins from the feature get paid.

Cat launches the Medusas' Gaze free spins round when she lands in any 3 or more places at once. 10, 12, or 15 bonus games play out, depending on how many scatters appear in the triggering spin. The Wild Re-spins are active throughout, so any time the shield lands, players are rewarded with extra spins of the reels.

Rich Wilde and the Shield of Athena scores 10/10 for high volatility. Players could see several non-winning spins in a row, but prizes can be substantial to make up for it. The default RTP is a healthy 96.25%.

It's launched across desktop and mobile platforms on 28th May and looks set to repeat the popularity of the others in the Rich Wilde series of Play'N Go slots.