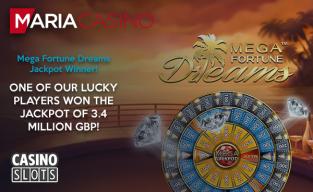 The Mega Fortune progressive jackpot by Net Entertainment is known for having previously held the world record for the largest online jackpot in history, and it's definitely turned a lot of players into millionaires in a single spin. That's exactly what happened recently at Maria Casino when a lucky player took home a huge, seven-figure jackpot on this game. Its timing is particularly impressive considering tat Hall of Gods paid off at the same casino just a couple of weeks earlier for a jackpot worth over EUR 10 million.

The largest jackpot in the Mega Fortune Dreams game is actually tied to the original Mega Fortune title as well, and online casinos get to choose to have one game or the other to offer players. They hae similar themes with a different implementation, but they both have the same massive jackpot available. With Mega Fortune Dreams, you're getting the latest of the two titles with its wealth-based theme and lots of ways to win.

About the Big Winner

The identity of the winner was not released, but he did mention that he was planning on using the money to take care of his family and the people close to him. That's a pretty big amount of money that he won, and if he plays his cards right, then he will never have to work again. It's possible that other members in his family will have the same sort of luck, but it just depends on how he decides to use the money.

The year has almost come to a close, but what we've seen with these big winners at Maria Casino is that progressive jackpots are as big as ever. They have historically been the games that pay out the largest prizes and that have the biggest audiences of players, and it's easy to understand why when you can become rich inside of a single spin no matter what stakes you play. We want to say congrats to the big winner and good luck to everyone else shooting for a big jackpot at this online casino.