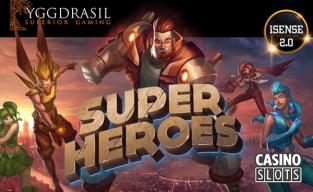 Yggdrasil has had a pretty good year so far in 2016, and they haven't stopped yet. Their newest release really shows that they're trying to close out the year in an extremely strong way, and that's in more ways than one. The Super Heroes video slot is a great way for them to finish 2016 and to show that they are consistent with the quality of their games.

As you could probably guess from the title of this game, Super Heroes is about a bunch of comic book-style heroes who are here to save the day. Something that makes his game release so interesting is that it comes along with a virtual comic book that fleshes out the background of the slot and introduces the characters and relevant storylines. This isn't something that we can remember ever seeing before, and it's a cool way to build a bit of storyline canon around the slot. This could also make the game easier to transition into any kind of future sequels or sister titles.

Most video slots today have five reels and three rows, and this title is not an exception to that rule. However, it does include several different features based on six new super heroes, and each of those heroes has its own special feature. These include wild reels, instant wins, multipliers and others. You'll also have a chance for free spins with extra super heroes there to give you bigger and better promotions, which mean bigger and better wins.

There is also a €25,000 network tournament for this game that runs through November 6, and it will include a raffle in the game along with a leaderboard that also operates inside of the game, and that's a cool way to build momentum for this new title.

We don't know if this is going to end up being their last release for the year, but if it is, then it's a strong way to end the year. However, if it's not, then we'll be very interested to see what else they come up with after already having an extremely strong 2016.