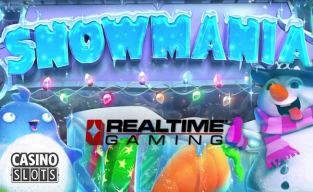 Realtime Gaming usually gets in a few solid new releases each year that make a pretty big dent in the business, and their latest release is looking like it could be one of the best of those for 2016. Snowmania is their newest video slot, and it features a winter theme. This game is to be released on November 23 at Springbok Casino initially, but it will be available at other sites not long after that.

What's Included in This Game

RTG has used 3D graphics in this game to give players a chance to really feel like they're walking through a winter wonderland while they enjoy solid slot action. It will be released on both desktop and mobile to give players a lot of flexibility on how thye want to enjoy this title as well. The wild symbol shows up on the middle three reels, and the main gameplay is based on an appropriately named avalanche feature. Winning symbols are crushed and fall out of the way for new symbols to fall into their place, and this gives you chances for even more wins.

There are also multipliers that come along with this avalanche feature. You get a 2x multiplier after a single crush, 3x after the second crush and 5x for every spin after that. You can also pick up three or more of the present bonus symbol for a set of 10 free spins with a 3x multiplier that compounds with the avalanche multipliers to give you total prizes worth up to 15 times their face value in the pay table.

What Snowmania Means for RTG

Snowmania might just seem like a standard-issue winter slot release to some, but it's a part of a bigger part of what Realtime Gaming has been doing for years now. After getting a ton of criticism for the quality of their games for quite a while, they decided to turn things around completely, and they have been putting out extremely high-quality content ever since. Snowmania is an excellent example of this, and it just goes to show that you can teach one of the oldest online casino software companies in the business (around since 1999) new tricks.