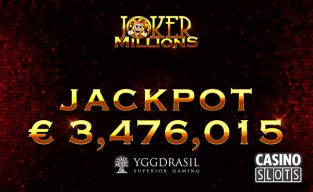 If you're a fan of online slots, then it's probably your dream to hit a big win on a progressive jackpot and take down a life-changing amount of money. A lucky player recently nailed a major payout like this one on the Joker Millions slot by Yggdrasil Gaming and picked up €3.5 million in the process. It's a very impressive win, but it's not the only time that this game has turned someone into an instant multi-millionaire in the past year. This win happened at Vera&John Casino.

Back in July of this year, another player hit a jackpot on this game for €5.1 million, and another payout in the range of the current won was picked up in December of last year. This game is the flagship slot for Yggdrasil in a lot of ways, especially in the progressive department, because it has the largest pooled jackpot of any of their titles in their entire portfolio. It gets a ton of attention for these big wins that it puts out as well.

How to Win the Joker Millions Jackpot

This is a video slot with five reels, three rows and 25 paylines, in spite of the fact that it's based on a theme that most people tend to associate with classic slots instead. When a joker appears on the reels, you get an instant random payout that can be as large as 1,000x, and that makes the game action-packed to begin with. If you get all 15 symbols on the reels filled with jokers, then you'll take down the progressive jackpot.

Yggdrasil has had some big releases so far this year, but they've also had some major wins like this one. They're showing that they're even more well-rounded each year, and adding more major jackpot wins like this one adds even more depth to what they have to offer players. It also shows that they are an even bigger players in the online slots industry as a whole than they were in the previous years, and this growth just sees them getting bigger and bigger.