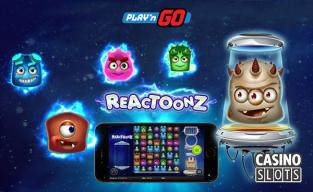 Play N Go has finally released a game that has been getting quite a bit of fanfare in reviews with their Reactoonz online slot. This game stands out for having a much different type of format than what you normally see since there are seven rows and seven columns of symbols, and you play based on getting clusters of matching symbols together at once.

One thing that has built a lot of excitement about this release is that it's actually a sequel to an incredibly popular title called Energoonz. Aliens fall down into the seven-by-seven grid in this game, and you'll have the ability to trigger various bonus features that give you a lot of ways to get paid, especially with combination and cascading wins that allow you to get prizes in several ways on the same spin. Combine this action-packed style of gameplay with the fact that it stands out quite a bit on its own due to its not-so-usual format, and it's easy to see why this game release was so highly anticipated.

Awards Tell a Lot of the Story

Games like this one are the reason that Play N Go gets so much attention, and it's also why they won the IGA Slot Provider of the Year award for 2017. They've released a lot of great titles this year, and it's hard not to really get into what they have available when they release games in so many sub-genres with such a variety of formats, themes and concepts. This company really knows how to appeal to a wide range of players, and the awards they've picked up this year and prior show that it's a consistent thing for them.

The new Reactoonz video slot by Play N Go is available at a lot of different casinos, and a big part of that is that they have content distribution deals with platforms like Microgaming Quickfire that get their games in front of tons of players. With the quality of what they put out, it's easy for them to get big deals like this one because their games are in high demand from players and software platforms alike.