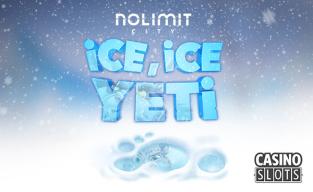 Ice, Ice, Yeti is a cool now slot from Nolimit City where the reels are encased in blocks of ice and the strange creatures that live there can reward players with wins of up to 8820x the stake. A roar of the Yeti can result in up to 16,807 different ways to win running across the 5 reels.

Chill Out With Ice, Ice, Yeti

The cartoon graphics will ensure that players will warm to these frozen reels, escpecially when symbols of an Arctic Fox, Snow leopard and a cute Polar Bear are seen. The reels are 3 symbols high, but in any spin, the Yeti Shake feature can break blocks of ice to add extra symbols above or below the reels for more chances to land a win.

A roaring Yeti is the wild symbol who can act as others to complete combinations. He breaks more blocks of ice and sticks around while other reel positions spin for free. Other symbols can also lock in place if they can increase the value of a win. If more Yeti symbols appear, these also stay frozen in place until players don't see any more wilds appearing.

If all the blocks of ice are broken, 16,807 ways to win will be in play, which should see multiple lines completed at once.

Play On All Devices

Ice, Ice, Yeti is playable on desktop PC, mobile smartphones and tablet computers. Just 0.10 is needed to start spinning the reels, with high rollers able to place a maximum bet of 100.00 per spin. It's available now at online casinos that carry games from this popular Swedish developer.