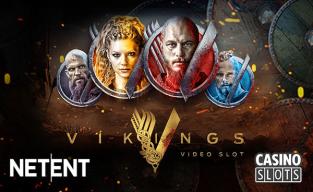 NetEnt have announced the launch of a slot game based on the hit TV series, Vikings. Featuring Norse marauders from the show, the game offers a series of extra features, including free spins, symbol transformations and expanding reels that can lead to 78,125 winning ways across them.

Vikings is a 5-reel slot machine with 243 ways to win. While playing card symbols, designed to look like blood-soaked swords, will pay out the lower-value wins, actual images of the main cast will return the top prizes. This game is as action-packed as the series, with several rewarding bonus features to trigger.

If the Raid Spins are awarded by 3 or more scatter symbols appearing, players will see the number of ways to win expanding to 78,125 in a 7-reel, 5-row game. Seven free spins are awarded and special Hotspots will be seen. Any Viking character that appears will transform other Vikings into the same type of symbol.

A Shield Wall can be awarded at random, where mystery symbols are revealed to give players some great winning opportunities. In the base games, players can also see Hotspots appearing on the middle reel, transforming Vikings in to high-paying combinations.

A Game For All Devices

This slot machine can be played for stakes as low as 0.20 per spin, across desktop and mobile platforms. By mixing a hugely popular show with a game that packs so many features and so much style onto the reels, NetEnt will surely have another major hit in their range when it's released.

Since first announcing the partnership at ICE in February the anticipation and excitement has been building all year. At NetEnt, we are huge fans of Vikings too and are delighted with the product we’ve created.