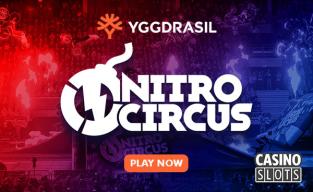 Nitro Circus is the first branded slot machine from Swedish casino games developer Yggdrasil. It's based around the adrenaline-fuelled stunt show and Yggradsil have jumped through hoops to make sure that the game is as exciting as a Nitro Circus performance.

Getting Revved Up For Nitro Circus

Led by Travis Patrana, Nitro Circus has become the top stunt show in the world, with an array of vehicles performing the seemingly-impossible for a huge number of fans. Yggdrasil have taken the thrills of the show and applied them to a brand-new 5-reel slot machine. Features include free spins and a Nitro Blast mini game, where players can win multipliers, free games and extra wild symbols.

The highlight of the game is the unique Nitro Jump, which gives players the option to pick their risk level and hit the famous Giganta Ramp for some of the top awards. The Nitro Jump allows players to choose their favourite vehicles, with each having different charateristics when it hits the ramp.

The game was previewed at an action-packed event in Malta this summer, where stunt riders performed for casino operators. It's now been released at online and mobile casinos that carry the Yggdrasil range.

Source - Buckle up for the ride of your life with Yggdrasil's Nitro Circus slot www.yggdrasilgaming.com/news 16th November 2018