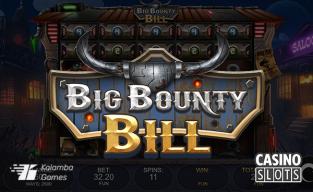 The game has a Westworld, or Wild Wild West movie style to it. The reels are set in a Western town, with some sci-fi touches, such as the multiple planets orbiting above.

Look to the reels, where villains, ray-guns, robot horses, and playing card symbols fill the 5 reels. The game starts with just 4 rows of symbols across 1024 ways to win. The 3 blanked-off rows of symbols above the reels can be unlocked when players land gun symbols and get to fire at the tiles.

Once symbols have been shot, players will need to trigger a HyperSpins bonus feature to reveal the symbols underneath and activate all positions.

Symbols in the first row need to be shot just once, but 2, or 3 shots are needed to unlock the second and third rows. Once the reels are fully expanded, players have a huge 16,807 ways to win, massively increasing the odds of landing winning combinations.

There is an option to place HyperBonus bets, to gain immediate access to the free games feature.

Big Bounty Bill has the potential to pay out substantial prizes, but the high volatility means that winning combinations can be rarer than in many other slots. It has a very high payback percentage though, with an overall average of 97.33% paid back as winnings.

Players will be able to spin these reels for stakes of between 0.30 and 30.00 per spin. It's available for an exclusive period on the Relax Gaming platform via their Silver Bullet programme.

“Big Bounty Bill incorporates several of our proven features to add extra layers of excitement and drive player engagement, making it an essential addition to any operator’s lobby.''