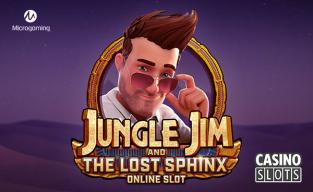 Jungle Jim and the Lost Sphinx is the latest slot in a hugely successful series themed around a fictional adventurer. It's just been launched at online and mobile casinos that feature the Microgaming range and has been developed in partnership with Stormcraft Studios.

An Adventure in the Desert

This new game sticks to the high-quality graphics and animations used in the other slots in the Jungle Jim series. The action moves from jungle to desert, as Jim explores a hidden tomb, searching for ancient Egyptian relics. This is a 5-reel, slot with 35 paylines, which features bonus rounds such as tumbling reels with rising multipliers and free games played out over extra lines.

Symbols on the reels include colourful gems, treasure chests and a mysterious Book of the Dead. Jungle Jim is the top symbol, paying out 10x the total stake for 5-of-a-kind combinations.

Winning symbols vanish, allowing new ones to drop into their places, ina system called Rolling Reels. If this creates a new win, the prize is doubled, then tripled if yet another winning combination is created by the second roll. Multipliers can go all the way up to 10x.

After the third roll, the reels expand from 35 to 50 lines, which makes it easier to land more and more rolls, and those bigger multipliers.

Three or more scatters symbols lead to 12 free spins, The reels will expand to 50 lines and multipliers are doubled, so players can boost a win by a huge 20x over.

Jungle Jim and the Lost Sphinx is optimised to play on PCs and mobiles. Stakes can be set from as little as 0.10 per spin, to a maximum bet of 20.00. It's a high volatility slot machine and has average returns of 96.3%.

It's now available to play across the Microgaming network.