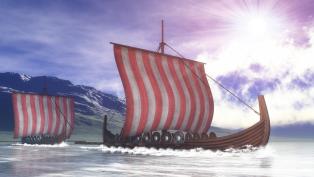 Endorphina's video slots have a certain atypical visual style that has gotten them quite a bit of attention. While they don't have the most games of any software company out there, the titles that they do have available are of a very high quality, and this has helped to gain them a ton of supporters. With their newest title Vikings, they continue this high-quality approach in a game with some solid features and good gameplay.

What Vikings Brings to the Table

What Vikings has to offer players is 20 paylines spread across five reels with three rows of symbols. Even though the basic format of this game is pretty straight-forward, the symbol set and the way the game is presented gives you a fresh experience. Something that's pretty cool about this game is that there are actually fewer discrete symbols than most video slots, so your chances of winning go up based on that alone. With that having been said, there are a ton of winning combinations available, and since the paytable is somewhat flat and balanced, you won't have to deal with overwhelming swings.

Check out how the payouts work in this new video slot. While there is a wild symbol, it doesn't have its own set of payouts. The top win is for five of the viking symbol, and it wins you a 1,000x payout. Four gets 200x, three wins 50x, and two earns you a 10x win. Note that this is the only symbol that pays for two of a kind. Five of the horse wins 500x, and you'll get a 400x payout for five of either woman. The emblem and shield pay out 200x apiece for five of a kind as well, and the A/K/Q symbols pay 100x for five of a kind.

Endorphina has continued building their momentum for quite a while now with regular, high-quality releases. The new Vikings slot is a good example of how you can take what would seem to be a plain theme and turn it into something that players want to come back to over and over again through pure gameplay and attractive graphics. Overall, they seem to have good things in their future, and that will definitely be the case if they keep coming out with solid games like this one.