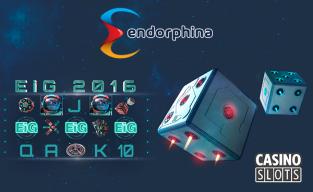 One of the things that has gotten a lot of attention in the past is the idea of custom online slots. The basic idea is to create an exclusive game that is developed on a custom basis, usually for a particular online casino. Endorphina did this recently as a part of a collaboration with Clarion events, and it turned out to be a very good-looking game with a bit of a space theme.

The game itself looks pretty solid overall. It's loosely based on a voyage through space, and it's just in time for the European iGaming Expo, an event that ran this past weekend in Berlin. The point of the expo is to showcase different technology and see what's going on with the many different parts of what now makes up the European online gambling market. It has five reels and three rows, and you get to see space in the background behind the transparent reels. There are A, K, Q, J, 10 and 9 symbols on the reels as well, but they are included with special gambling-based symbols centering on casino, poker and bingo games.

We have to admit that this was a very novel idea, and we can't remember ever having seen something like this before. The basic idea was to give the people at the event a chance to win different things through the game, including free trial usage of Endorphina's games and other prizes that those in the business would really appreciate. This has gotten them a ton of attention, and it seems to be a part of a strong overall marketing effort that has worked to push them forward in the industry.

How Endorphina is Doing

Endorphina has a strong marketing effort behind it, and it has used this in the past to give players a lot to get excited about. When they go to release a new game, they build a lot of hype behind it, and in the case of this software developer, the hype is well earned. The fact of the matter is that their games are pretty solid all around, and they definitely have a claim to being one of the main names to watch because of the quality of the content they have produced so far.