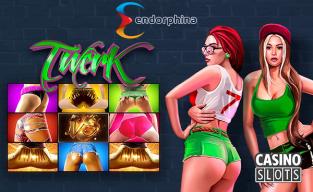 Endorphina has been talking about their Twerk online slot all year, and it was first introduced at ICE Totally Gaming in the first quarter. It got a lot of attention, and it's a great example of them introducing a different theme than anything we have ever seen before in the online slot world. This game has finally been released, and it's a pretty big deal because it pushes the sex appeal aspect of the game further than we've ever seen before.

Twerking is a style of dance that involves shaking your hips and thighs rapidly in rhythm with the music, and it's something that has gotten a ton of attention at concerns, in music videos and on television shows. The Twerk online slot by Endorphina captures this concept by putting different women on the reels in what basically amounts to a contest, and whenever you hit a winning combination, you get a show of them dancing along with your normal payout.

It's obvious that there is a major sex appeal aspect to this situation. The reels are essentially filled with the rear ends of various women, and the reality of the situation is that you're trying to get winning combinations of matching shaking butts. It's not done in a hyper-sexualized way, however, and it comes across as more of a fun thing than gratuitous sexuality. Endorphina has really went out of their way to promote this slot, and not players will finally get a chance to experience it for themselves as it goes live.

While Twerk has gotten a lot of attention, it's not the only thing that Endorphina has done that's gotten them noticed this year. They're actually looking to launch two more titles before the beginning of 2017, and while they haven't really hinted at what those titles might be, it's interesting to see that they aren't resting on their laurels. They've worked hard to get including in more platforms and in more jurisdictions, and this aggressive expansion strategy is putting them in the drivers seat in the sense that they are getting their titles in front of more and more players.