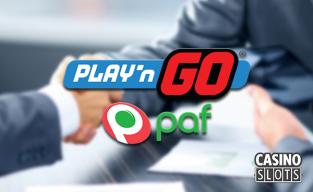 The situation with online gambling in Finland is pretty interesting, and one of the most important entities there is Paf. Thanks to a new deal, Play'n Go's titles will now be available on the Paf platform, getting them in yet another part of the world inside of this era of regulated markets. This is pretty big news for the software developer for obvious reasons.

What's involved in this new deal will see all of Play'n Go's titles, both mobile- and desktop-based, added to Paf's software platform. It's a good addition of games that have been proven in the market already, and it goes to show that good content will always be in demand, even in today's market that consists of several different regulated jurisdictions. This software company has been great about expanding and getting into new markets in 2016, and this is just the bit of momentum they needed to get things built up and ready for a strong 2017 as well.

The Nature of the Market

The online casino market right now is interesting because it's so segregated. Each country has their own jurisdiction, and there are even some countries that have multiple jurisdictions inside of their borders. For a software company like Play'n Go to make the jump to Paf shows that they are continuing to get into more jurisdictions, which means more players will have the opportunity to play their games. In turn, this puts them higher and higher in the virtual rankings, bringing them a higher level of popularity.

Paf.com is a gaming operator that has both land-based and online operations. They have actually been running since 1966 as a company based around turning profit into public good, and they have hundreds of employees. They have players from a variety of different countries including Finland primarily, but also Sweden, Spain, Italy and others. They're a pretty big deal, and for Play'n Go to get added there is a major testament to how impressive their games have been. Overall, we won't be surprised to see them get added to other platforms at any point, but getting on Paf is pretty good news for them.