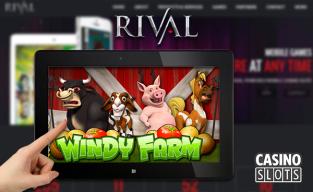 Something we've wondered about in the past is why there weren't more online slots built around farm motifs. There have been tons of video games based on farm simulations and farm settings, so there is plenty of precedent for it. Rival Gaming has taken the initiative on this with their Windy Farms video slot, a new release for October.

This new slot offers a lot for players on a five-reel, three-row and 50-payline layout. You'll see lots of farm animals on the reels with chances for a big wind storm to come through the game at any point. When this happens, you'll see chickens thrown all over the reels. This might seem inconvenient, but it's very much a good thing since chickens are the wild symbol in this slot. You'll see them expand upward and downward, depending on the weather, and this is something that we think is very cool in how they have incorporated the theme of the game in how the wilds behave.

Aside from the weather-driven bonus features, the bull scatter symbol gives you a chance for a free spins bonus round as long as you get three or more on the reels. These free spins give you a chance to rack up a lot of wins at once, and with a fairly balanced pay table, you'll have better chances than usual of coming out with a modest win instead of worrying so much about whether you're going to win anything or not.

Rival Gaming has done a lot of great work in 2016, and that's something that no one can really argue with. Like many online casino software providers, they have worked hard on switching from a quantity-based mindset to a quality-based mindset over the past few years, and all of that work has culminated in a massive 2016 with a lot of cool new titles and a big change to the perception of the company. They used to be known for a lot of cheap-looking slots, including more classic slots than you'd see from most other providers, but they have repaired that perception with consistently high-quality games.