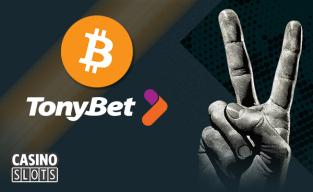 Over the past 18 months or so, we have seen a steady increase in the number of online gambling sites that accept bitcoin as a deposit and withdrawal method. This number has increased once again now that TonyBet has announced a new partnership with SpectroCoin, an electronic wallet option that will facilitate bitcoin deposits and withdrawals. There's a lot that goes into this deal, and it makes TonyBet one of the first well established online casinos to add the cryptocurrency to its list of available payment options.

One of the biggest issues that players have with depositing in bitcoin is that they think they have to keep their account balance in bitcoin as well. Because the cryptocurrency has been particularly volatile, there's a base of people who enjoy online casino play but who don't want to see the value of their account balance fluctuate up and down wildly, as bitcoin has occasionally done in the past.

To get around these issues, TonyBet is going to allow players to deposit in bitcoin but have their actual account balance held in a traditional currency. This avoids the volatility issue while still allowing players to enjoy the lower fees and other advantages of using bitcoin as a deposit and withdrawal method.

This feature is achieved by converting bitcoin directly into the traditional currency at the time of deposit, which is something that other properties have done at times to avoid the same kind of problems.

Will This Work for TonyBet?

It's worth noting that as soon as they announced the addition of this cryptocurrency as a banking option, TonyBet saw an atypical surge in new sign-ups. This would seem to indicate that there was a serious interest in an established brand offering this payment options that wasn't being filled, and this online casino seems to be getting the benefits of meeting that demand in the market.

TonyBet has been getting a lot of attention for their work in emerging markets lately with new jurisdictions putting together regulatory bodies and licensing processes, and with the inclusion of bitcoin as a payment options, it looks like 2016 is getting even better and better for them. They have built up a lot of momentum in the past several months, and they will be heading into 2017 full throttle.