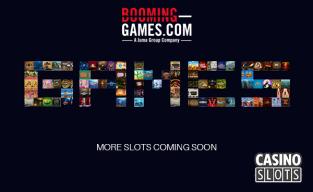 A set of three new games have been announced along with their release dates from Booming Games. These titles cover a few different themes, concepts and graphical styles, and they show the overall range that this company can produce for. It's an exciting time for slots fans with so many new titles coming out inside of the next month or two.

First up is Wild Pride. This game is based on an African safari theme, and it's already been released in just the past couple of days on October 17, 2017. You'll find symbols that interact with each other in this game along with multipliers to give you bigger and better payouts during a free spins feature. This is a theme that has been used a lot before, but Booming Games has put their own spin on things.

Booming Bars is the next title up on the list, and it's seeing a release date of November 7, 2017. This is a classic, three-reel slot that's based on 2x wild multipliers. It's a bit of a throwback title to many games with this particular format and this type of gameplay focus on multipliers that are tied to wilds, but it looks great with several different diamond-themed lucky seven symbols.

With a name like Jingle Jingle, it's clear that this is a holiday-themed slot that's coming up just in time. This game is going to be released on November 21, 2017, and it has some characters, presents, snowflakes, stars and tree decorations all over the reels. It pays in both directions, which is great news for a video slot, and it also has stacked wilds to make it easier to hit several payouts on the same spin. A free spins mode gives you yet another way to get value as well.

What Booming Games is doing right now is releasing several titles across the next few weeks, and they're building momentum towards the end of the year in the process. This means that they're looking to close out 2017 in a strong way, which will likely lead to another aggressive release schedule for 2018.