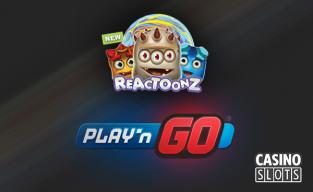 When Play N Go announces that they have a new game coming, players take notice. This is because they are known for consistently putting out high-quality work that gives players a lot to look forward to. This is the case once again with their Reactoonz video slot, a game that has a huge grid of symbols and that gives players access to a feature-rich play style.

A Quirky Theme and Gameplay

Taking just one look at this slot will tell you right away that it's not like most games. Instead of using a traditional reel and payline structure, there is a grid of seven rows and seven columns of symbols. Wins in this game are based on getting groups of matching symbols. They do not have to be in a straight line, but they do have to be touching either horizontally or vertically. This means that rectangles, squares and other non-standard shapes can give you payouts as long as there are at least five matching symbols that are adjacent to each other. Diagonal symbols don't count as touching in this sense.

To the right-hand side of the play grid is the Gargantoon, and he is sort of the king of these toon characters. If you get a non-winning spin, he will give you a chance to pick up between four and eight wild symbols at random spread across the game to give you a free opportunity to pick up other wins. Winning combinations also charge up a meter on the left-hand side of the screen that can be used to build to features as well. These features add different behavior to the game grid, which in turn means more opportunities to get paid.

Play N Go Does It Again

It's kind of ridiculous in a way that Play N Go can bring out fresh content like this on such a regular and consistent basis. This game is definitely going to be a hit because it combines non-standard gameplay with a ton of action and features, and that's the type of thing that has always done well in the online slots world.