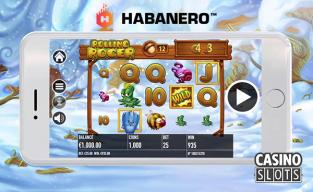 There are a lot of online slots out there that have themes that are obviously based on established brands and characters. The Rolling Roger slot, the newest release by Habanero Systems, is much the same as it's obviously built around Sonic the Hedgehog, one of the most prolific video game characters of all time. You can play this game with his replacement in this game, Rolling Roger, to tear up the forest and find some big payouts.

On the reels, you'll see a number of different characters from the woods. Roger will roll through the reels at random, and when he passes one of the high-level symbols, you'll earn an acorn with the Rolling Roger feature. Add up 40 of those, and you'll trigger a free spins bonus feature with three or more scatters. Those acorns and the number you have when the feature is triggered determines how many free spins you get. What's more is that you can spend these acorns to turn the low-level symbols into wilds, so you can think through what those payouts are worth as you play.

Like all of Habanero's game releases at this point, this hedgehog-based title is brought to players via HTML5. Companies like this one have helped to make HTML5 the premier way to deliver online casino content, particularly in the slot space. What this does that's so important is that it allows you to play the exact same game on your desktop, tablet or smartphone, and it will automatically adjust the size of the reels and the controls to fit whatever type of screen or device you're using.

With the Rolling Roger feature that this slot centers around, thus the name of the game itself, you have opportunities to get some serious payouts. The usage of the acorns as a type of currency once you've triggered the free spins mode is pretty smart as well, and we've definitely seen nothing like it before. This innovative approach has made Habanero's game releases a pretty big deal for a long time now, and it's no surprise that they always get a lot of attention from players along the same lines.

Press Release, Be at One With Nature With Rolling Roger squareintheair.com, October 25, 2017