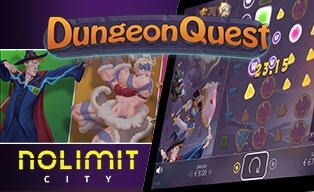 Dungeon Quest is a new slot from Swedish developer Nolimit City. It's optimised to play in portrait mode on mobile devices and features 5 reels, with 29 paylines across them. The slot is set in a dark dungeon, where players must uncover a host of bonus features, such as free games, sticky wilds and multipliers.

The symbols are in a 5x7 format, and pay when seen on adjacent reels, not just from left to right. Symbols include valuable gemstones, plus special modifier symbols that trigger the features. Random features include the Power Stone that covers a 2x2 section of the game, with each spot becoming wild symbols. All lower-value symbols will also become extra wilds at the same time.

In the Gem Forge feature, a randomly chosen lower value symbol will become a higher-paying gemstone for the following spin.

A black orb triggers Alchemy free spins, with a 4 bonus games playing out. In each spin, extra symbols will turn wild, locking in place for the rest of the feature, which can add up to a full game screen of wild symbols by the end. This awards Legendary Loot and Epic Wins, for some great cash awards.

This legendary slot will be available at Nolimit City partner sites from September 27th.