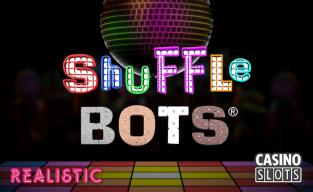 Award-winning games developer Realistic Games has released details of their next slot machine. Shuffle Bots is a 5-reel, 20-line game that's filled with disco-dancing robots, including a special Cocktail Bot who turns random symbols into extra wilds. A unique bonus round gives players extra spins for free, plus shuffling reels that can retrigger the feature over and over.

The cartoon style of Shuffle Bots makes the game stand out from any desktop or compatible mobile device. The symbols are all set against the squares of a dancefloor and a glitterball sparkles above the reels. High-card symbols create the lower-value combinations, while a range of robotic dancers return the top prizes.

When the Cocktail Bot randomly appears, he will turn a number of symbols into wilds, which act as any others, completing extra combinations. If the bonus games are triggered, not only do players get to enjoy the chance to claim wins without having to wager anything, but the shuffling reels feature means that the spins can be retriggered for even more winnng opportunities.

Shuffle Bots uses the Games Machine technology that Realistic Games plan to implement across their new releases. It allows them to create excting features that can then be used in future concepts.

Shuffle Bots® offers the player a wide range of engaging features both in the base game and during the feature round, and the chance of randomly activating the feature again and again is sure to be a dancefloor hit with them.