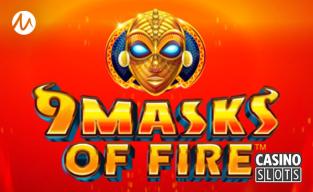 Deep in the jungles of Africa, drums beat as the 9 Masks of Fire slot machine spins up wins across 5 reels and 20 paylines. It's released by Microgaming, but developed by Gameburger Studios and follows on from the success of the previous collaboration that made Break Da Bank Again Respin so popular.

Traditional fruit machine symbols such as cherries, BAR and lucky 7's appear across the game, along with a diamond wild symbol that acts as others to complete win-lines. The diamond is also the most valuable symbol, paying 125x the total stake when it fills a payline.

The African mask symbol pays prizes when landing in any 3 or more places. If players see 3 mask symbols at a time, they win an instant cash award equal to the triggering bet, but the payouts rise with more masks, leading to a massive 2,000x the bet when 9 land in a single spin.

A traditional African tribal shield launches a free spins bonus round. Before the bonus games begin, players get to spin a wheel which reveals how many free games then play out, along with any win multipliers that will be in effect throughout.

As few as 10 extra spins or as many as 30 could be triggered, with win multipliers of 2x or 3x. The bonus games can be retriggered over and over with the appearance of more shield symbols. Players who manage to land the diamond wild symbol across the reels at the maximum multiplier could claim a huge win of 7,500x their total bet.

This game comes in desktop and mobile-compatible formats and players are able to spin the reels for stakes of between 0.20 and 60.00 per spin. It's a medium volatility game with average returns of 96.24%.

The game features thrilling graphics and a rhythmic soundtrack that truly embraces the African theme, and the addition of the Free Spin Wheel offers a highly entertaining experience with tremendous win potential.