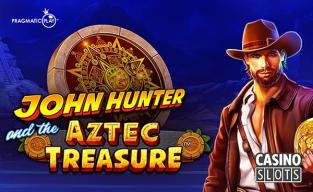 Pragmatic Play has just launched the latest in their John Hunter series. John Hunter and the Tomb of the Scarab Queen takes him on an adventure through the relics of ancient Egypt, where valuable scarab beetle symbols can lead to big wins.

The game features 5 reels and 25 paylines. Players will be able to spin the reels on desktop and mobile platforms for stakes of between 0.25 and 125.00 per spin. It features classic icons from ancient Egypt and will appeal to anyone who likes this hugely popular theme.

An Egyptian-style soundtrack accompanies the game. Images of ancient gods and pyramids appear, along with high-card icons and the equipment used by John Hunter to explore this mysterious realm. The Queen is a wild symbol, but players will want to keep an eye out for scarab beetles, as these unlock some innovative bonuses.

Scarabs on the first 4 reels will each have win multiplier values attached to them. If a special 'Collect' scarab beetle lands on reel 5, on the right side of the game, any of 5 bonuses will be awarded.

All cash values on the other beetles can be awarded, or players could collect and an extra prize from other symbols. All beetle prizes can be multiplied by up to 25x before being paid out, or beetles can multiply across reels, which triples payouts when they fill all 3 rows on the game.

All beetles could also lock in place while the rest of the reels spin for free, which can lead to even more scarabs appearing. The combined awards are then claimed.

Three pyramids symbols lead to a free spins bonus round. Any scarabs that appear during the 8 free games will be collected in a meter above the reels. At the end of the round, a giant 4x4 scarab fills the first 4 reels while the other reel spins one more time. If a Collect beetle lands, all collected scarabs pay out, with multipiers of up to 25x leading to potential wins of 10,000x the stake.

The high-end graphics and special features of John Hunter and the Tomb of the Scarab Queen are set to make it another success in the series. It joins other John Hunter slots such as Da Vinci's treasure and Aztec Treasure at online casinos which use the Pragmatic Play range.

“We are always looking to develop exciting content, and the John Hunter games give us a great platform to develop a fascinating story with a great character.”