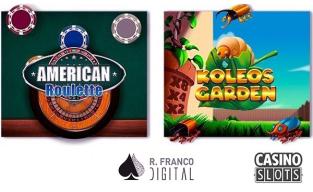 Both games are fully optimised for play on desktop and mobile platforms, while they have been developed in English and Spanish to appeal to a wider multinational audience.

The American Roulette game uses 3D graphics and realistic sound effects to give players the impression that they are at a real table in Las Vegas or Monaco. Players have a clear view of the table when making their bets, which changes to a shot of the wheel as the ball spins around. Game history is available for players looking for a pattern and a betting strategy, while a wide range of stakes opens the game up to casual gamblers and high rollers.

Koleos Garden is a 4 reel slot set within a tranquil botanical garden. 81 paylines cross the reels, and the game comes with bonus features including wild substitutions, and free games.

American Roulette and Koleos Garden were launched on 22nd October exclusively on the Wanabet platform, but will soon be available across all online and mobile casinos that use R. Franco games.

Founded in 1965, R. Franco is the biggest casino games developer in Spain. The digital side of the business launched in 2015 and is now behind an extensive range of online and mobile games played around the world.

R. Franco offers a robust gaming platform that features their own range as well as third party games.