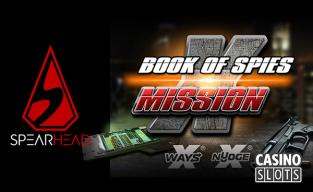 The latest slot from Spearhead Studios is the adventure-themed Book of Spies: Mission X. It's a 5-reel game with a basic 1024 ways to win across the varying rows of symbols, and uses the xWays and xNudge systems used under license from Nolimit City. The number of winning ways can increase to a huge 16,807 during the bonus round.

Brave heroine Lara Jones appears in other Spearhead Studios slots, and this time she's here to break a secret code with the help of Extreme Hack Harry, and One Shot Suzie.

The xWays Mystery Symbols place between 2 and 4 symbols on a reel, helping to create extra ways to win. An image of Lara is a wild symbol that will trigger the xNudge feature and sees her fill whole reels, increasing a multipler by the number of nudges it takes to move her into position. If several examples of the symbol appear at once, any multipliers combine for a potentially huge payout.

Scatter symbols also nudge into place, triggering as many free spins as nudges needed to launch the feature. That can lead to anywhere from just 3 to 21 bonus games playing out and during the round a random symbol will expand over reels to help complete combinations.

xWays Mystery Symbols in the free spins can create up to 16,807 ways to win, making it much easier to land wins throughout the feature.

Book of Spies: Mission X is a highly volatile game with average returns of 96.1%. Players can win up to 27,000x their stakes and spin the reels for between 0.20 and 100.00. It's available now in desktop and mobile formats at the best sites carrying the Spearhead Studios range.

“Book of Spies: Mission X is our most innovative game to date. With its super-cool theme and cast of great characters, our team had a lot of fun designing and building it. With the xWays® and xNudge® features able to trigger on every spin.''