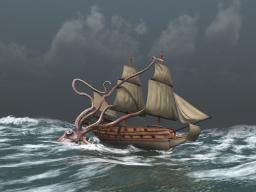 Most new slots these games use five reels with three rows, though some might use four rows to mix things up a bit. With the newest release by Play'n Go, you'll see something different. The new Eye of the Kraken slot uses three rows with three columns. However, because each individual symbol spins independently, it's not truly a three-reel slot even though it has this classic appearance. This atypical layout lends itself to lots of options for different types of bonus features.

How Eye of the Kraken Stands Out

First let's point out that this game is going to have eight paylines. This includes three vertical lines, three horizontal lines and two diagonal lines. This isn't normally possible in a three-reel game because of each reel's symbols being dependent on each other, but that's the case in this situation since the symbols themselves are just as independent in one direction as another. This makes triggering bonus features a little different than what has been tried in three-reel games before.

You'll get what amounts to random wilds on the reels from a tentacle raising up to place them from time to time, and no traditional wild symbol appears on the reels themselves other than this feature. The diving helmet is scattered in this game, and you'll need at least five of them to trigger a free spins bonus feature. This seems like it could be excessive, but it's hard to say because they seem like they will show up pretty often. During those free spins, you'll get instant wins if you get a treasure chest on the reels, and the eye of the kraken will appear to give you an additional wild option.

The torpedo symbol shows up on the reels as well, and they are tabulated throughout your session. When you reach a total of 50 of them, then you're taken to a bonus feature where you're choosing from different treasure chests on the bottom of the ocean. You can win as much as 500 times your triggering bet, and that's a pretty substantial sum, but it might take you a while to get the bonus round to start. Overall, this is an atypical game with atypical features and a lot of value waiting for players.