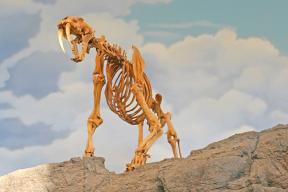 When you look at the themes that have been used by online slots and other types of casino games, you'll find that a lot of patterns come up. Certain types of themes like the deep sea concept or the Asian-themed game or the Egyptian game have been done so many times that it's ridiculous. For a software company to stand out these days, they have to come up with something a bit more original instead of basically copying and building on what's already been done. Quickspin is looking to do that once again with their Razortooth slot.

About the Razortooth Online Slot

With Razortooth, what you're getting is a 243-ways format game with five reels and three rows. It's based on a pre-historic theme, but instead of being based on dinosaurs, it's based on other types of animals. Think a more mature Ice Age than Jurassic Park. On the reels you're going to see a woolly rhino, a mammother, a sabre-toothed tiger and plenty of other creatures from the time period. This is a theme that we haven't really seen tackled by any software providers yet, and that's interesting because it seems like there is a lot of excitement and action waiting to be had.

There are two main features that are going to be seen in this game. One is primarily for normal play, and that's when a sabre-tooth tiger (based on the title of the game) runs across the screen and leaves a number of symbols switched to wilds. The second feature is a free spins bonus game, and you'll get a reel held completely wild on every single spin to give you much better chances of winning.

This is Quickspin's second new release of the past few months. In August, they released the Crystal Queen slot, a game that's gotten a lot of attention. It followed the same pattern of breaking away from established themes in online slots, and that's something that Quickspin seems to be really paying a lot of attention to. That's a great strategy because it shows that they want to be different and stand out from the crowd, and that's definitely a strategy that's paying off because more people know about them and their titles now than probably any point before.