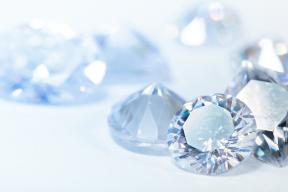 For classic slots, the factors that make a game good are different than those for video slots. Because there is a limited amount of visual real estate, every symbol and every feature has to be carefully crafted to have a maximum level of impact. That's the case with the Diamond Dazzle online slot by Rival Gaming that's their most recent release. This game uses one payline across three reels, and it has a symbol set that's based on gems, jewels and diamonds. The gameplay is solid with a high hit-rate as well.

Here's how this game works. There is one payline and three reels, but there are three positions where the symbols can appear since they can be one spot off of the payline as well. This comes into play with the black diamond scatter symbol, which pays for just one anywhere you can see on the reels. Players can play for one, two or three coins, and it's best to play with three coins because you get a better set of payouts that are proportionately higher than playing with just one or two.

The symbols really make this game. There are three diamond symbols, and getting three of any of them on the payline will get you a payout, though you can get bonus payouts if they go from largest to smallest (or vice versa). Five gem symbols show up on the reels as well, and any three of them on the payline will give you small wins on top of the larger, three-figure payouts you can get from three of a kind. Finally, three of the scatter hits the jackpot in this game with a 1,500x payout when you play with three coins.

Rival Gaming has made a number of classic slots recently, and it looks like they're trying to provide new titles in a space that hasn't had many in a while. These games that they're putting out are visually appealing and have solid gameplay. While they aren't going to be the best-looking games in the industry, they are definitely sufficient for most players, and the gameplay itself stands out as being better than most classic slots that are out there today regardless of when they were produced or what software company developed them.

A good option for trying this new game is Desert Nights Casino.