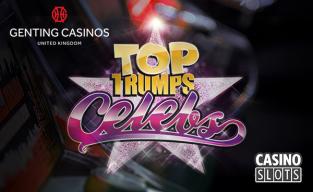 Genting Casino, one of the leading names in the United Kingdom's list of online slot providers, has finally announced that its newest title, Top Trumps Celebs Slots, is ready for release. This game combines the UK's nostalgic love for the Top Trumps card game with the unwavering popularity of the glamourous celebrity life to create an exciting, star-studded slot that will keep players entertained for hours.

This is a five reel, three row video slot with 20 pay lines and tons of glitzy features. The game features an excellent assortment of A-list actors and actresses, socialites, pop idols and even world-famous models to choose from. Players are allowed to choose five celebrity symbols to use within the game, and Genting has given an exclusive sneak preview of some of the biggest names available.

As an added bonus, there are four mega stars that act as the game's wild symbols, which replace everything except scatters and bonuses. These elite four are Johnny Depp, Madonna, Brad Pitt and Elvis Presley. In addition to the star-studded list above and the wild symbols, the Top Trumps slot also offers free spins via a scatter symbol. Landing three scatters on a pay line will award players 10 free spins.

This game even has a red carpet bonus round that can be triggered by landing the bonus symbol on reels one and five of any pay line. The bonus round shows players a wall of 16 names and lets them choose whether to keep the displayed names or shuffle the deck for new ones before selecting three celebrities to reveal a cash prize. This prize is then immediately available to bank, and there is even the possibility of earning extra picks for more chances to win bigger prizes!

Genting Casino has been operating since 2010, and they have earned an extremely good reputation in that time. They offer games from Playtech, IGT, Amaya and more, and they are licensed by the Alderney Gambling Control Commission.