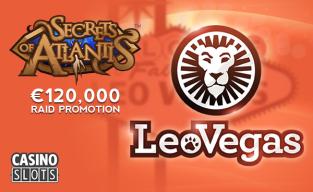 The lost city of Atlantis is a mythical city that was once somewhere near the middle of the Atlantic Ocean that was told to have fell into the sea. LeoVegas Casino is giving players a chance to take advantage of the legend of this ancient city with their new Secrets of Atlantis online casino promotion with a chance to win an incredible amount of money and other prizes.

Details on the Promotion

To start off with, this promotion runs until September 21, and it's broken up into four different leaderboard competitions that started on August 25. The second leaderboard starts today and runs through September 7. The third goes from September 8 through September 14, and the fourth and final runs from September 15 through September 21. Each week, you'll be able to earn points for every $10 that you deposit and play through total, and then you'll get even more points as you continue to play with specific Quest games that are noted in your interface. You'll get rewarded with double points on mobile, and you'll get double points no matter how you play on the weekends.

Each week, the top 50 players on the leaderboard will share €20,000 in prizes with €5,000 going to first place alone. On top of that, players will have chances for other giveaways for Apple devices, free spins and other goodies. This is a value-packed promotion that gives players an opportunity to get paid in a major way for games that they were going to be playing anyway, and that's the best type of promotion that you can have.

Despite the somewhat atypical name, LeoVegas Casino is a popular site that has gotten high ratings from players because of their great selection of games from top providers like Net Entertainment and Playtech, as well as their usage of the Microgaming Quickfire platform. They have frequent, big promotions like the Secrets of Atlantis event that's running right now, and the best part is that they design things so that all players can get in on the action. Play your favorites at this online casino right now, and you could end up getting a piece of the treasures of Atlantis in the process yourself.