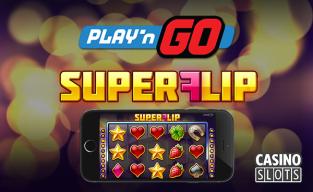 The newest release by Play'n Go has been announced, and it's looking like it could be a pretty big deal. The name of this game is Super Flip, and it's centered around stacked symbols and a flip-based bonus feature in the free spins. This title is a good example of this company putting together a title based on gameplay ideas first and filling in the graphics later, so you'll see some pretty standard fare as far as graphics and music go.

There are stacked symbols on all reels, and this plays a pretty big part of the overall gameplay. The way this works for the re-spin feature is that if you get the first and second reels completely filled with the same symbols, then you get a free re-spin of the third reel. This makes it a lot easier to hit big payouts from multi-line wins, which is a key part of the excitement when it comes to playing video slots like this that use stacked symbols.

You can pick up three or more of the scattered Super Flip symbol to get payouts along with a free spins feature. The way this feature works is that after each spin's payouts are given to you, the left two reels and the right two reels flip to give you an extra shot at payouts. This essentially just makes the game pay in both directions as far as the actual size of your pays are concerned, but it's still a cool way to go about it in terms of building up a slot around a given concept.

Play'n Go has been really pushing in 2016 to give players a wide range of new releases. Some of them have been a bit hit-and-miss, and some industry figures have said that this company hasn't really gained much ground so far this year because a few of their releases have seemingly been duds. With Super Flip, it's clear they're not really trying to win EGR B2B awards or anything, but it definitely has a fun element of solid gameplay to it, and it's something that players will really be able to get some time out of, even if it's not the most visually impressive game out there.