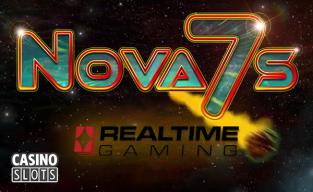 In the online slot industry, developers have to keep pushing the envelope several times each year with new games and new features. This is how they show that they are keeping up with the latest trends and that they have fresh new titles from players to enjoy. A failure to do this can hurt them in a major way, but Realtime Gaming is showing once again that they are near the front of the pack with a new slot release.

The new Nova 7s slot looks very interesting. It has five reels with three rows and 25 paylines, and it's all about an outer space theme with supernovas, solar flares and a matching soundtrack. The gameplay is primarily driven by the red 7 wild symbols, which can give you several different extra features based on the space motif. The Solar Flare, Nova, Supernova and Hypernova wild features can give you things like 7x multipliers, turning multiple reels wild or a combination of various similar features.

As if the wilds didn't cause the game to be feature-packed enough, the blue 7 symbol gives you four different features that you can win. You can start out with seven free spins, and this can come with extra wilds, 7x multipliers, wild re-spins and other options. Overall, this is a great way of packing a ton of excitement into a new title, and it shows that Realtime Gaming is staying ahead of the curve when it comes to producing new titles that offer excellent gameplay for their players.

Realtime Gaming realized a few years ago that they were falling behind other slot providers, so they completely changed up how they produced games. The end result is that they have been coming out with very high-quality games for a few years now, and they offer up some of the best new releases that you'll find anywhere. Nova 7s is a good example of taking a theme of a game and tying the features and gameplay into it in a way that makes sense. This game is set to be released on September 14, and we definitely recommend that players check it out since it could be one of the hottest new releases of the summer.