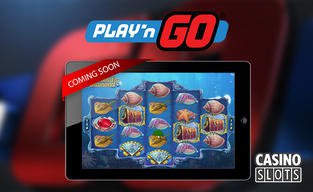 Mermaid's Diamond is the latest online slot announced by Play N Go. This game takes place under the sea with a variety of gems and deep sea creatures, and the visual presentation is up there with the best that they've ever produced. This is a very solid game with action-driven gameplay and a fun theme.

A Different Type of Gameplay

It won't take but a moment to notice that this game has a different style than most slots. You'll find five reels with three symbols on the first and fifth reels, four symbols on the second and fourth reels, and five symbols on the middle reel. From there, the game has an "all-ways" format, so there are actually a total of 720 ways to win on each and every spin. That's a format that will give players a lot of action from the very start, and that's before you even see what the features are like.

A Variety of Features

A lot of features are added to this game to increase the hit-rate and give you a larger variety of payouts that you can win. First up is the trident wilds feature where Poseidon himself will come up and add random wilds to the reels. In the Divine Intervention feature, you can get a free chance to pick up a fifth scatter when you have four already on the reels. Five treasure chest scatters gets you a set of up to 25 free spins, and these free spins have opportunities to re-trigger over and over again.

Play N Go knows a thing or two about making exciting games because they have a portfolio full of them. They have been more aggressive with their new releases in 2017 in terms of pushing the envelope with the gameplay style of their slots, and that's something that players have responded to particularly well. The quality of their games has always been solid, but now it's getting better and better, and the new Mermaid's Diamond online slot shows that in a major way. If you're looking for a dive into a deep sea of free spins and other goodies, then this is the game for you when it releases on September 20, 2017.