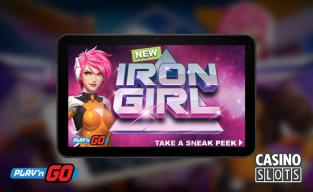 Award-winning slots developer Play'n GO has announced that their next release will be the intergalactic adventure Iron Girl. Playing out on 5 reels, with 20 fixed paylines, Iron Girl is due to hit online and mobile casinos on 4th October 2018.

It's a cartoon style slot machine that comes with outstanding graphics and animations. The reels are set against a backdrop of stars and cosmic clouds that float past as they spin.

An Adventure In Space

Symbols consist of the 4 playing card suits, in a futuristic style, plus 4 evil villains and Iron Girl herself, who is a wild symbol. The highest-paying villain returns prizes of up to 150x the per line stake when he's seen across a line. If any of these bad guys and girls create a winning combination they are held in place, along with any wild symbols in view, as all other reel positions spin once more.

This Villain Respins feature carries on as long as new examples of the same character, or wilds, are landed. A Bounty Bonus meter fills up with each respin and once they have finished, players could get an extra reward. If 8 sticky villains have been collected in the feature, 2 extra wilds are added in random positions. Anyone who collected 10 villains will see their feature wins doubled in value, while the wins are tripled if 12 examples of the triggering villain were landed, Any 14 or more, will see the total feature wins multiplied by 5 times over.

Special Iron Armour can fly onto the reels at any time on a non-winning spin, adding up to 5 extra wild symbols onto the reels, replacing lower-paying icons and perhaps even triggering the Villain Respins.

Players can stake from just 0.20 per spin up to a maximum wager of 100.00 and Iron Girl comes with a default return to player percentage of 96.70%.. It's fully optimised for playing on desktop computers and mobile devices.