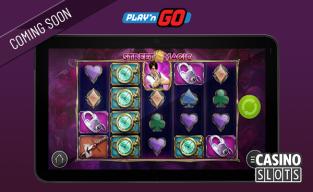 Street Magic, from Play'N GO is a 5-reel, 20-payline slot that sees a magician performing tricks that can lead to some extra rewards. With outstanding graphics and magical features such as expanding wilds, and free spins with richer reels, this is a game that has plenty of rewarding tricks up its sleeve, including wins of up to 5,000x the total stake.

The playing card suits return the smaller prizes when landing across any of the paylines, with picture symbols such as daggers, handcuffs, padlocks and a ring paying out the higher prizes. The symbols of golden playing cards is a wild icon and the animated magician is another wild, as well as the scatter symbol.

When the magician is seen in 2 places at once, players will see him perform one of three randomly selected tricks. This can be both wild magician symbols expanding to fill whole reels, or he could deal out extra golden cards to help complete paylines. A third magician could also appear as if by magic, which will trigger a free spins bonus feature.

Players get 8, 10, or 12 free games, during which any golden card wilds will stick in place for remaining spins. If a wild symbol is seen on each of the 5 reels, extra spins are added on, with up to 8 more games playing out once the current round has finished.

This exciting slot should teach players a trick or two when they spin the reels at Play'N GO online and mobile casinos from 13th September.