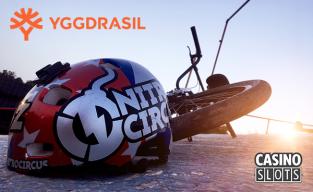 November sees the launch of Nitro Circus, a slot from Yggdrasil Gaming that promises to bring the excitement of this famous stunt show to online casinos. To celebrate the upcoming release, Yggdrasil held a party on the island of Malta, where over 100 guests were treated to great food and a BMX show from two of the biggest stars of Nitro Circus.

Led by co-founder Travis Pastrana, Nitro Circus has become a major brand and have partnered with Yggdrasil to produce this new slot game. The launch party included a barbeque prepared by Yggdrasils' own chef, Ivan, plus a stunt show from BMX riders Todd Meyn and Kurtis Down.

Guests participated in a Shot Slots tournament, which have become hugley popular with Yggdrasil players since they were introduced in 2016. This was the first of many more planned events where the supplier will invite guests to enjoy unforgettable experiences.

Nitro Circus will be touring Europe later on this year, in conjunction with the launch of this new slot game.

Our events give clients a deeper perception of our game, and the concept behind it, which is our goal for the Slot Shot Tournaments. This is the first of many memorable events that we are planning, so come along and Join The Ride!