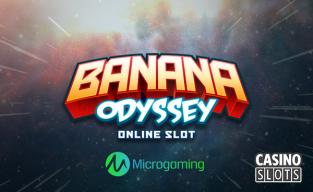 The latest slot from Microgaming and Slingshot Studios follows the exploits of space chimps as the seek out treasures on a planet of bananas. Banana Oddesy is a colourful cartoon game where players can discover treasures of their own as the unlock special features such as expanding wild symbols, respins and free games.

Blast Off With Banana Oddesy

This 5-reel, 10-payline slot is compatible with desktop PCs and mobile devices. Players can spin the reels for stakes between 0.10 and 400.00, making it suitable for casual punters and high rollers.

The game pays from both the left and right sides, helping players to land more winning combinations. Its aim is to make players feel like they are on a journey, racing across the galaxy to Banana Planet, where great riches await.

The Banana Oddesy slots game stars two chimps, Buck and Chip, who are joined on the reels by ray guns, rockets, jars of nuts and high-card symbols.

The fruitful search for Banana Planet is helped by an expanding wild symbol that can land on any of the middle reels. It locks in place during a cosmic respin and if any more wilds appear, these also stay put for another respins.

Lift Off With Free Spins

The action goes into orbit when 3 scatter symbols launch 10 free spins. During the bonus games, wild symbols expand and lock in place for the rest of the round, leading to some astronomical payouts.

The game is a collaboration between Microgaming and Slingshot Studios. It's been available at Twin Casino on an exclusive basis but has now been made available to a wider audience.

It's an energetic, fast-paced game with a great soundtrack and popular features.

“We are over the moon to bring Banana Odyssey to the market. There’s a great deal of humour, energy and attitude in this game, packed with punch and visual clarity, and balanced with mathematical and aesthetic personality.