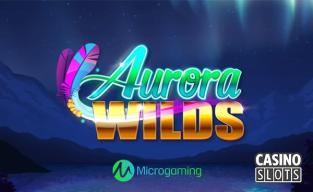 Aurora Wilds is the first slot released under a new partnership between Microgaming and Neon Valley Studios. It's a 5-reel, 10-line game that transports players to the far north, where they will find expanding wilds, respins, and a jackpot wheel.

The Northern Lights shine down on the reels of Aurora Wilds. Stunning design features and artwork bring the dramatic landscape to desktop and mobile platforms at sites which use the Microgaming range. A mystical soundtrack helps to set the scene.

Totem animals dance around the screen, along with wild symbols that can appear on any of the middle 3 reels.

Wilds then expand up and down to fill all 3 rows on the reel, helping players to create winning combinations. They then lock in place as other reels spin once more. If more wilds appear in the respin, these also expand and award a further spin of the remaining reels.

Any 3 or more scatter symbols open up a jackpot wheel. Once it starts to spin, players are guaranteed to pick up one of the 4 jackpots on offer, including 1 that's worth a huge 2,000x the total bet.

Neon Valley Studios is a small, independent operation which has joined forces with Microgaming. They will develop slots exclusively on behalf of Microgaming and the range will be featured at the numerous online and mobile casino sites that feature their range.

Aurora Wilds pays homage to one of nature’s most amazing phenomena and is designed to captivate and reward players with fluid gameplay and big jackpots.”