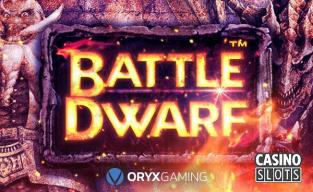 ORYX Gaming is set to launch an exciting new slot into the European casino market. Battle Dwarf will be the second game in their range to be based on the pachislots format that is so popular in Japan. Stunning graphics and thrilling gameplay feature in this slot, where hungry dragons trolls and goblins face off against a brave dwarf.

The action in Battle Dwarf plays out on a 3x3 grid of symbols crossed by 5 paylines. It's a high-volatility slot with an overall RTP of 95.18-96%.

It's been developed by Golden Hero and JTG studios in Japan. The game takes players deep into a mine, where different characters fight for precious jewels. Three 'VS' symbols appearing at once will trigger an epic battle between dwarf and dragon.

If the dwarf is victorious, players enter a Treasure Rush free spins round, with improved odds of collecting prizes, triggering more bonus games or launching the battle bonus every 30 spins.

An Elf Bonus can be awarded at any time during the base games. It gives players the chance to collect prizes of up to 300x their total stakes, or award entry to the battle feature.

In Ragnorak mode, the Battle Dwarf slot offers players a greater chance of victory against the fearsome dragon.

Battle Dwarf is now available exclusively on the ORYX Hub. It's the second pachislot after Hawaiian Dream and looks set to follow the huge success of this ground-breaking game.

“The release of Battle Dwarf cements our position as a trailblazer in the gaming industry, as it is only through our content that European players can enjoy the thrill of the pachislot gaming experience.''