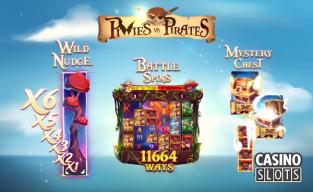 Pixies vs. Pirates is a 6-reel slot that offers players 729 ways to win. The unique topic covered by this slot from Nolimit City combines with special features, such as free spins, mystery symbols and nudging wilds with rising multipliers.

The fun theme is shown in great style. The action takes place on the deck of a ship, where 3 pirate symbols and 3 pixie symbols are joined by high card icons 9 through to A.

The Pixies vs. Pirates slot uses the xNudge mechanic. Stacked wild symbols will hudge into place, with each shift raising a multiplier that applies to any subsequent wins. A new xWays system randomly awarding a symbol that replicates to increase the number of winning ways running across the reels.

Any 3 or more treasure map bonus symbols trigger a free spins bonus round. Before these begin, players need to decide if they want the Pixie Queen or Pirate Captain fighting for them. The reels expand to give 11,664 ways to win and the battle begins.

Queen and Captain symbols are collected during the free games, and if the chosen character appears more often, the round is retriggered.

The high-volatility action can be enjoyed across desktop PCs, iOS and Android devices at sites which use the Nolimit City range. Stakes can be set from as little as 0.20 per spin to as much as 100.00.

“Pixies vs Pirates is our first release with our new xWays feature mechanic, merged with the previous smash hit mechanic xNudge! The two together can create thrilling spins with huge potential!.''