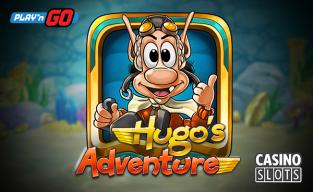 Hugo the Troll is a popular Danish cartoon character who has already been the subject of 3 slots from Play'n GO. Following the huge success of Hugo, Hugo 2 and Hugo Goal, Play'n GO have just announced the launch of Hugo's Adventure.

The awesome animations include Hugo himself over the reels, along with other characters from the show. The game features a special bonus round, which gives players 3 lives. Hugo has to avoid obstacles to keep his lives, and players collect bigger and better rewards along the way. Extra lives can be collected during this adventure, leading to an even longer round.

The familiar cartoon style and innovative features have made Hugo's Adventure the best slot in the series. Whenever Play'n GO create a Hugo game, they ensure that it features something new and exciting to appeal to the wide audience.

The game has been co-developed with 5th Planet Games, who own the rights to the Hugo character. Players can look out for this fun slot machine at online and mobile compatible casinos that feature the Play'n GO range.

“We’re delighted with this latest Hugo release, and we think fans will be too. We had the aim of bringing Hugo to a wider audience through the casino market, and this has been realised through a remarkable partnership with Play’n GO.”