In recent times we’ve seen a growing number of new software developers, and they’re not all of top-notch quality. This is probably the main reason some of them prefer to stay as anonymous as possible, not giving out much info on the company. Some of them will go as far as not to have an official website, Facebook page or any other internet source which could be used…

What we don’t understand is that there are selected few development studios that share the same level of anonymity, but they don’t have anything to be ashamed of. Quite the contrary!

Indi Slots only have a handful of games in the portfolio, but these are true little gems that have literally blown us away. All of the games come with some super-engaging graphics, and the gameplay can only be described as magnificently seamless.

Now, it’s time to pop the hood open, and check what this peculiar little software company is all about and whether the games are worthy of your attention. Let’s hit it!

As mentioned in the opening few paragraphs, Indi Slots are all about providing the gamblers with quite a unique gaming experience that relies on splendid graphics, massively engaging bonus features, and themes that will keep you entertained for prolonged periods of time. 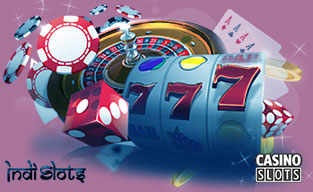 Not only do these guys have splendid graphics and visuals to show off, their games are also quite unique in terms of themes, so they have Bollywood-themed titles, games inspired by cricket, and more.

The very instant you load any game, you will be greeted by a simple interface that’s easy to understand and use. All games share the same interface, as all of them come with five reels and 243 paylines, spreading across the reels.

All the games share the same RTP, and it’s 92.7%. The minimum bet you can place in any game is 0.5 coins, and the maximum bet is capped at a generous amount of 35 coins. Another great thing about these titles is that the jackpot amounts to 250 times the bet you’ve placed.

That simple interface we’ve mentioned will provide you with simple yet effective controls for the fine adjustment of your bet size, along with the maximum bet button. Other buttons include the spin button, the autoplay button, and the mute button which comes in handy in case you don’t want to listen to any music or sound effects.

Bollywood Nights - Have you ever checked any movies from the rich Bollywood heritage? It’s nothing like the stuff that comes from Hollywood and it’s magnificent! The slot looks as if you’ve come to their own version of the Academy Awards, and all of the symbols are actually various characters from the movies, but they surely won’t mean much to you if you haven’t watched those… There are wilds and scatters, and quite a few bonus features to enjoy, as well.

Diwali Lights - Diwali is surely among the most remarkable events in the world. Each and every autumn it gathers millions and millions of people to celebrate the victory of good over evil, and it also serves as one of the ways of honoring Lakshmi, the glorious Hindu goddess of prosperity and wealth. Inside the game, you will find a wondrous depiction of the majestic Taj Mahal with countless little candles providing a serene atmosphere. It goes without saying the game’s loaded with many different bonus features.

Premier League Cricket - Are you into cricket? Well, the folks from India and the surrounding countries are surely crazy about it, so it’s no wonder it now has a dedicated video slot game. The symbols are actually various moves taken directly from the sport, and alongside these, you will find extra spins, multipliers, and Wild Events. It’s no wonder the game has already garnered high praise from a large number of players all around the globe.

Kabaddi Raiders - In case you don’t live in Southern Asia, you probably haven’t ever heard of Kabaddi. This is a contact team sport that’s very popular in India and it actually consists of two teams trying to tag each other before tackling players from the opposite team to the ground quite violently. If you take a look at the symbols, you will see that they are all different moves from the sport.

Lord’s Balcony - We totally get it that these guys are from India and they’re mad about cricket, but we didn’t really see this one coming… They actually have TWO video slots themed after India favorite’s pastime. This means that these two titles are basically interchangeable, and there are only minor differences in graphic elements. Still, this doesn’t mean you shouldn’t check them both out and see which one suits you better.

Whichever game you choose, you will simply be delighted by the amount of details and features available. Each one of them is so meticulously crafted, it’s no wonder they’ve only managed to produce five games so far, as it seems that they really took their time to carefully hone each title as close to perfection as possible.

Judging by the font, the name of the brand, and the colors on their logo, we can only presume that these guys hail from India. Still, without any official sources of info, we can’t confirm or deny these claims.

Indi Slots are completely off the radar, and there is close to no info at all available about these guys, they have surely made a name for themselves. As their fan base grows bigger by the day, their games are a sight to behold, and we are very eager to see what they will come up with next. Hit your nearest online casino and witness these majestic titles!